#31 by Irontaco
This already reached the point where we get to the "na nothng about the game has a point lol worst game even worse than e.t for atari soz lol" "scott's the new phil fish" part of the topic without anything else to say about the good aspects of the game

Personally i did find FNAF 2 to be kind of lacking in originality, and the worst point of it was the persistent issue of it having LITERALLY no point to look at any other camera other than the Prize Corner, Left vent, Right vent. Any easter eggs or interesting stuff (like how foxy would go back to the Service room after resetting him or Mangle wandering about) would become very dangerous to look at when the animatronics + music box are not giving you a break. Making it feel like a chore as you wouldn't get to see anything new.

I felt Scott did not exploit as much how fucking unsettling was it to for example look at Bonnie or Chica twitching back in FNAF 1, or did not take any advantage to give the Toy animatronics anything outstanding apart from them just coming to the office; if anything, back when FNAF 2 was in-dev many people thought the Toy animatronics would attempt to disable the older ones, while being completely neutral to the security guard as long as he didn't have the Freddy Mask on, while the older animatronics would forget the player if they caught him with the mask on; even so, many people thought THAT was the reason of the old animatronics were all damaged was from the newer ones pulling on different parts of their bodies attempting to take them back to Service so they'd stop wandering about.

Taking all of that and other stuff aside, FNAF 2 had some nice things that made the game feel more complete and not as dead as FNAF 1 "pretended" to be, the death minigames, cutscenes, and phone calls with info kept me wondering what'd happen next and encouraging me to play, not to mention, it's really fucking terrifying to see Mangle at the ceiling, mouth wide open, uncertain if she'd attack at any point in the night. (you can actually have a full night complete without her attacking you) Or the scare factor of Golden Freddy suddenly being in the match, with a twist to avoid him. The way the game made you feel insecure by not being sure if you put on the mask at the right time or flashed the light enough was great. The game was rushed, though. Compensated by an intriguing storyline which became more than your usual creepypasta, something akin to Jadusable's BEN Drowned in which people would cooperate to dig on details hidden around the place, this is part of FNAF's success, other than school kids being like "oh man check out this game its better than slenderino". People who get deeply hooked on to incomplete stories would look deeper on, attempting to connect the dots Scott left around, unarranged, in purpose.

This possibly comes, in my opinion and what i've dug about, from the fact Scott hadn't really made games of this impact before, if you look at his previous games they're all very simple, with many having a "play again, if you lose, try harder!" basis which is present in many mobile games today (which is not a bad thing!). His older games weren't having success and he was in depression after releasing one of them, frustrated. The success of Five Nights at Freddy's probably pushed him back up, and he felt that having the same formula for FNAF II would appeal the fanbase (and it did), possibly scared of trying anything new (pherpaps? i'm not sure about this fact.) for fear of getting the same reject as before. And of course, money. He wins money and recognition for these, a big inspiration.

I do hope Scott comes with something shiny and interesting for FNAF 3, pherpaps with the same core principle as before, checking places and performing the right actions, but WAY more expanded on, something so that there's consequences apart from a scary bear popping up to scream in your face. Or many more things to look for. Otherwise, i will just consider FNAF 3 only the thing that completed the story i have been deeply interested for. I do suppose he came up with most of the story during the development of FNAF 2, as he couldn't really explain why he put Golden Freddy into the game until FNAF 2.
sup

#32 by chris0matic
Goddamn thank you Irontaco for atleast bringing in some logic.. *gives cookie* Yea. Anyways, Like Irontaco said, I hope Scott Cawthorn brings something new. I am kinda tired of the "Ooooh, ANIMATRONICS! HAUNTED! SCARY!" and the "PIZZERIA! OOOH!" aspect.
I mean, If Scott made it take place in a Carnival place, or a Mall, or something that wouldn't just serve Motherfucking pizza XD. Something Fresh would be nice, like the first game. I mean, I know he pumping out these games fast since he can just recycle coding, but I think he's putting these out a bit too fast. I mean, you got a successful game, and you pump out a sequel 2 MONTHS later? I hope he actually takes a lot of time on the third game. The second game was just too damn easy. The first game was actualy a challenge.

SyphenTV wrote: The second game was just too damn easy. The first game was actualy a challenge.

Night six is actually quite the hell in FNAF 2. If something was quite hard in FNAF 1 it was that Freddy was very unpredictable (except for sound cues) and that the 4/20 mode was harder than FNAF 2's 4/20.

FNAF 2 10/20 mode requires very precise actions and a plan, if anything i'd say FNAF 2 is harder but only because of the music box + the extra factors that come into play that werent in the first one.
sup 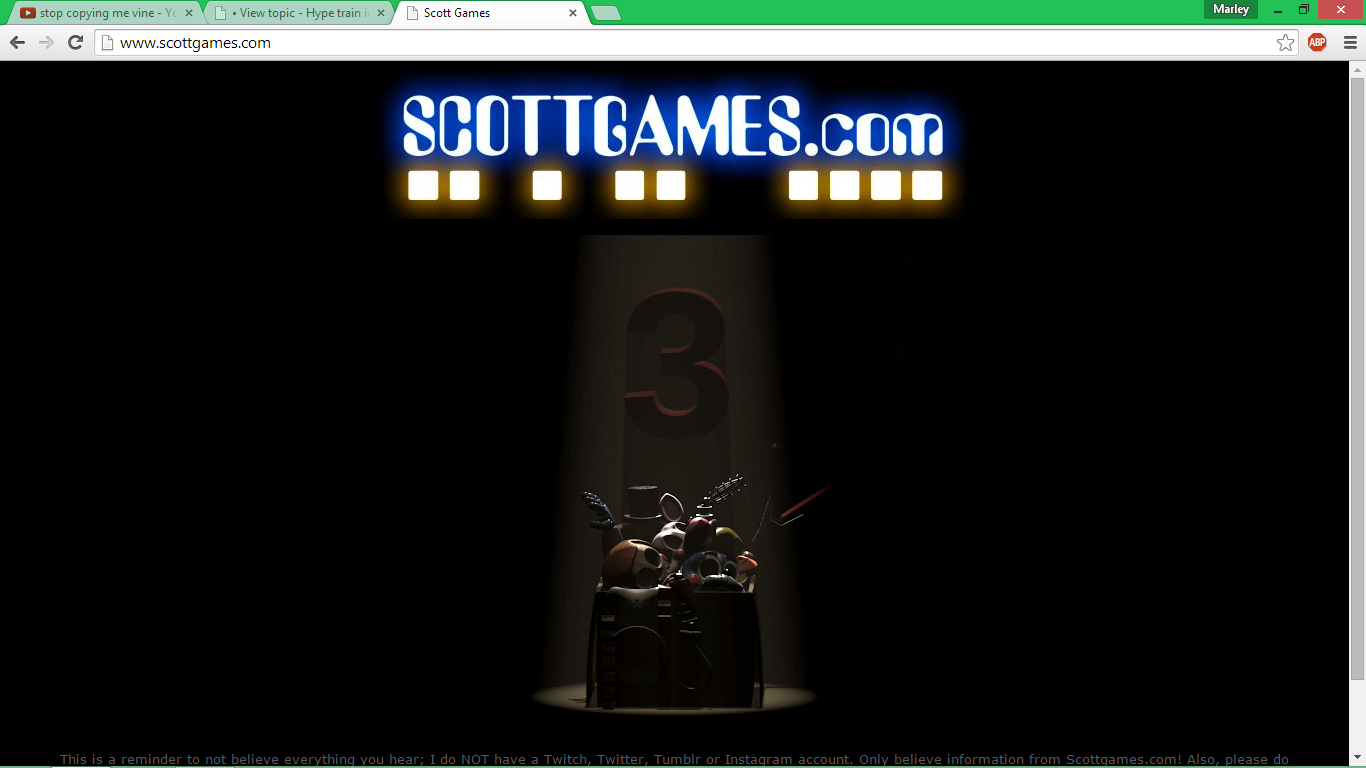 [youtube]umDr0mPuyQc[/youtube]
This profile's been around for nearly eight years

#37 by Brunou8
It could be my imagination but I see something in the background.
SCP classified documents
SCP-895 Containment chamber modification
D-9341 memoirs
Old topics of interest

#39 by juanjp600
We already have a thread discussing the teaser: http://undertowgames.com/forum/viewtopic.php?f=8&t=4342
39 posts
Post Reply