tl;dr stuff about modelling for CB again
Spoiler
Alright, so I'm unsure about how to ask this, but what do you think about 682 getting implamented into SCP CB?

I know, I know; the first thing, for those of you who are aware, that might come up upon hearing such a proposal from me is either; the ever dreadful amount of time 096 took me to finish. Or the unfortunate turn of events of me finding out about topolgy and getting more in depth with 3d modelling (and art in general) which really affected my motivation to continue on the MTF model ,and what eventually led me to abandon the model.

But this time it's a little different.

I've started getting more into 3D modelling again, and this is because I'm going to start on a game with some of my friends (that we've wanted to make for quite a long time now), and I, as with the previous models,really find practising by contributing to something that I genuinely find interesting and cool a plus on all sides.

What makes this different? Well, mainly the fact I'm not as busy and the fact that I'm actually researching and learning about 3D modelling and the process of making a model; just recently actually I've posted a 106 head mesh with low poly, high poly, and low poly with normal maps (done by using ZBrush, which I really need to get used to) something I've never done before. 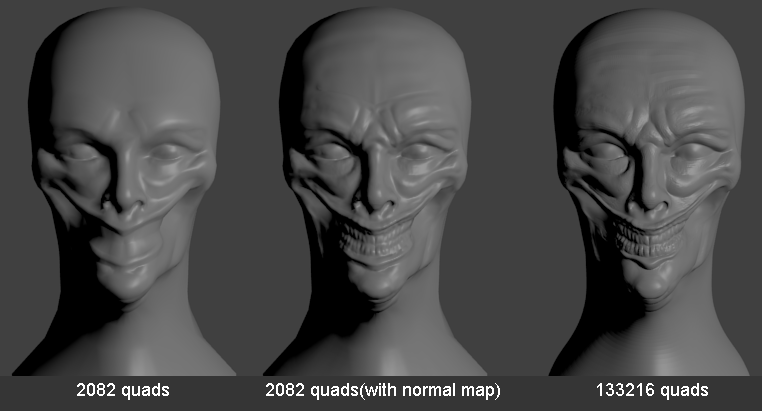 So i think there are better chances of me finishing this model unlike with the MTF.

I've already started on the 682 model, and I'm pretty pleased with it so far; and a bit later today I'm going to post a picture of the model. Currently on the phone and trying to sleep (tomorrow is my last exam for the year, but I just can't get this off my head

But more importantly is if we even need a 682 model to begin with. I remember that there was a model from the game Six Eight Two that was intended to appear in CB at one point or the other, but was cut short due to problems Mirocaine encountered with exporting it I think.
But since I haven't really been around (despite occasionally 'lurking' from time to time) I'm unaware about the current circumstances regarding 682 being implemented into the game, so if there's anything I should be updated about say it.

That's about it, sorry for the long post but I just really wanted to get this out.

For now night I guess

Last edited by Night on Tue Aug 26, 2014 2:31 pm, edited 8 times in total.
Some quick links for myself (and you all too).
SCP-096 model
MTF model
Forum Smileys
deviantART
Pixel Joint

#2 by Brunou8
Well, there has always been the intention to add SCP-682 to the game so I think it's okay to assume so. However, I think it would be better to hear a response from Regalis himself before drawing any conclusion.

#3 by Omniary
I'm really curious to see how 682 would be implemented. Clearly it can't be handled like 173, 106 or any other SCPs currently in the game. I'd imagine it'd have to have its own room and area where it'd chase you around. I was thinking maybe an area like the tunnels, but resembling normal hallways, with blast doors everywhere, which you'd have to close to slow 682 down. Other places I can imagine it being are a containment chamber for it, where it maybe slaughters a guard, and some extended appearances at Gate B. Maybe more can be added to the Gate B endings, where you actually use a code you found earlier on in the game, and you run to find a blast shelter, only to be chased by 682.
It slep time bunner.

#4 by Mirocaine
For scp-682 I honestly think wall of text potato could be good with the cannon ending of star wars a new pony for the greater good of ending D. I think that it would be q fascination of how 682 could handle toasted bread from 427 sprinkled with a good chunk of the wonderful spqhjetti code of the source code of wcp CB. But college is a pain in.the ass not only they rob you of your time and money but also tour hopes and dreams in some cases. This makes handling sco-682 far too situational to implement but counter-thesis of Albert Einstein I think joonas rikkinen will be able to comprehend the ultimate potato implementation of dynmic scipts and drafting for the world destruction code.
one thing is like to mentions the pdnidhshb

ok if you got the time to do the sculpt, model, animation and textures, maybe you can get it in for 1.0 by the end of this month but such a large and complex scp needs alot of work but your by far a better artist than me so if you got time go ahead!!

Well, I started with this model initially just as practice, which I will continue, so it's fine either way.

But why the big fuss about the upcoming update? Can't it be added after; or is it purely for the sake of making the update big? In which case 682 would obviously be a big addition to.

I was thinking about how it could possibly be used to extend the ending of gate B after 682 escapes, not sure how, but it would be interesting.

Yes! Yes indeed Mirocaine! But have you already forgotten about the interstellarally microscopic inclusion of when the tile effect is not dividable by 0, and/or not equal to potato^2-roasted pony? The Implications are unnerving. When said tile effect reaches the spaghettial level of the galactic potato, the vacuum of the outer code, and the inner rectum of sco-68two clash in a mircowavic bang with a systematic manually handled downgrading slope of peace, which, as it may imply, causes a shift in the loosely built paper folds of the carefully arranged origami-tile-effect-potatonium, and in turn creates a hole reaching down as far as 23 source codes below the canon plane of existing dynamic scripts!

Yeah but enough of that cringy shit. Tbh I think you work better/faster than me, but each to his own I guess.

Okay, here's the model so far, prepare your jimmies, as you're probably not going to like what you see:
Spoiler 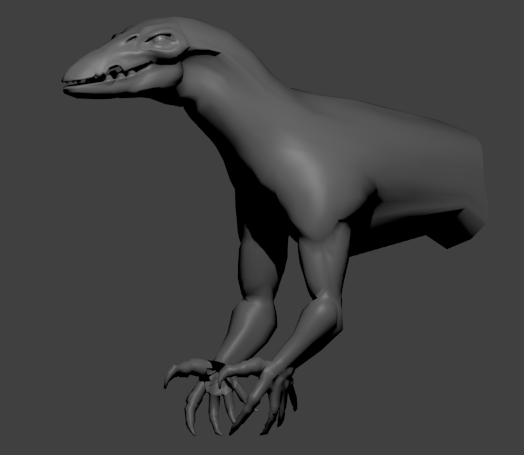 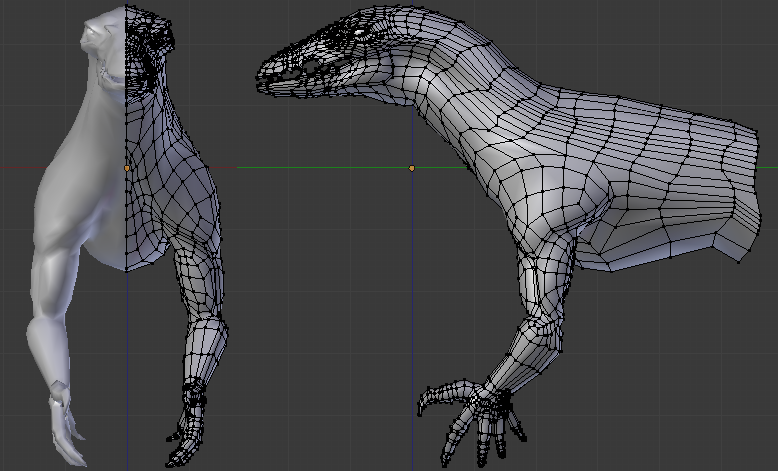 this is the low poly model, 3k quads so far(6k triangles), going to make the higher poly one later for bump maps and texture in ZBrush
pretty decent topology if I do say so myself, could be better, but definitely a huge improvement over 096, and the MTF
I'm making 682 bipedal, somewhat basing this on the skeletal structure of the fastest dinosaurs that existed which is like this. Obviously not making it as pussified, but I want to keep the general structure as I thought it would make more sense to make the way in which 682 moves and look resemble a fast reptile rather than a cheetah for instance (despite the "vaguely reptile-like" sentence).
There are some key parts I haven't yet made from the model aside for the other half of the body, and that is fur.. I guess you could call it (like in the smiley I made

).
I'm not really sure about how I'm going to go about doing this, but this was one of the main things that I wanted to practice with this model when I started so yeah, it's gonna be interesting.
Some quick links for myself (and you all too).
SCP-096 model
MTF model
Forum Smileys
deviantART
Pixel Joint

#6 by Omniary
Looks great so far, I can totally see the article photo in that face, interested to see how the rest of the body looks in comparison.

On a side note, I doubt 682 will make it into 1.0 considering the size and the amount of work left, then again maybe the Reg-man has quite a bit up his sleeve. 1.0 isn't the end all be all update where nothing is added upon after, so there's plenty of time to take on the model. It'd be less work on both you, and Regalis if you just worked at a pace which suits you, not the update.
It slep time bunner.

#7 by Night
Thanks! I based the head heavily off of the 682 article picture, along with what it actually - a beluga whale skull.
I'm still unsure if what I made as its eyes is where the actual eye sockets are in the whale, but o'well.
Some quick links for myself (and you all too).
SCP-096 model
MTF model
Forum Smileys
deviantART
Pixel Joint

#8 by GIMLI_2
just amazing..
keep up the good work, i like it alot if scp models look just like in the article picture
very well done 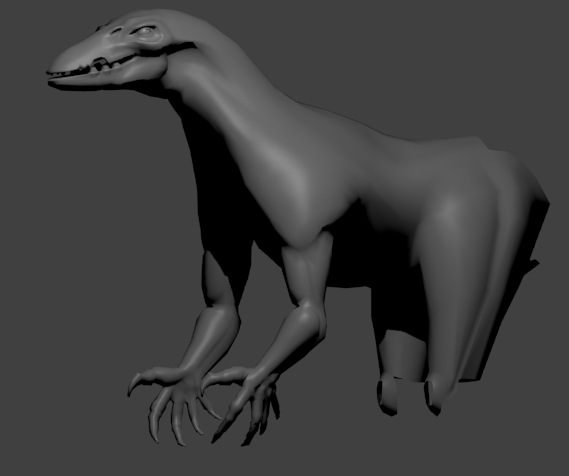 Some quick links for myself (and you all too).
SCP-096 model
MTF model
Forum Smileys
deviantART
Pixel Joint

I know you guys see it!