As many of you may know, me and juanjp600 have been working on rewriting Barotrauma’s networking code for some time now (oh god, I just checked and it’s been 9 months, why does time have to go so fast). The old networking logic was so full of issues (trivial to hack, constant desync issues, excessive packet rate) that we had to basically redesign everything from scratch, but based on the testing sessions I’ve been hosting recently, it really seems to have paid off. Now we’ve finally got proper authoritative servers and syncing logic that actually works(!).

The rewritten netcode is by far the most important change in the latest update, but it also includes some other new stuff, including reworked UI graphics, a sonar overhaul and bunch of bugfixes. See the full changelog here.

A few words about the sonar overhaul: now there’s the option to select between passive and active modes. The passive sonar doesn’t send out pings, but instead listens to sources of sound around the sub and the sounds reflected from nearby structures. This makes it possible to get a rough idea of the surroundings without alerting monsters (or enemy subs) with the ping. The sonar displays were also given a little facelift: 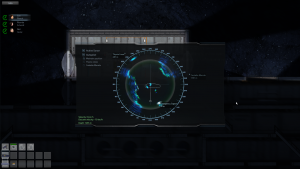 On another note, I haven’t forgotten the plans regarding opening the source code to modders – more about that later this week. 😉