Good news: James Bear (“Moonsaber”), the artist behind the monster in SCP-860-1 and a ton of concept art for SCP-CB, will be taking part in the development of Subsurface by creating concept art and sprites for the game!

Here are some of his sketches of potential inhabitants of Europa: 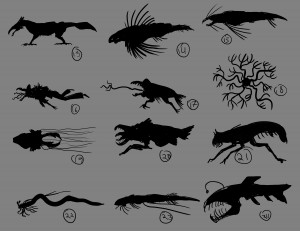 I also shared my thoughts about some of the features of the subsurface ocean with him, and did a quick sketch of what the environment might look like, and they might be worth posting here as well: 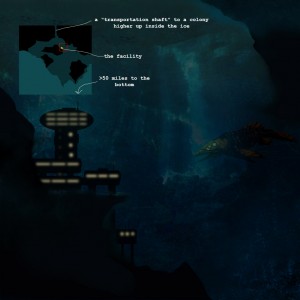 (the creature in the background is a WIP sprite by Moonsaber)

[The area around the facility]
The facilities will be located inside large cracks in the ice, close to the bottom of the ice sheet (see pic). The actual bottom of the ocean is supposedly somewhere far below the facility and the ice formations around it, but it can’t actually be reached in any way. So there’s just this enormous abyss below the actual gameplay area with plenty of space for mountain-sized monsters to swim around.

[Temperature of the water]
I think the temperature of the water should be around the same as in Earth oceans or a bit colder. I’m not 100% sure yet whether temperature should be a gameplay element or not: having to worry about the characters getting hypothermia if you don’t get them out of a flooded area fast enough might add some gameplay value, but in most cases drowning or being crushed by the pressure are more prominent threats and maintaining a comfortable room temperature might easily become just a tedious chore. But in any case, I’d imagine the temperature being somewhere around 40-70 F.

[Amount of light under the ice]
The ice layer is apparently at least a couple of miles thick in reality and should be very thick in the game as well for it to be stable enough to build any habitable structures inside it. No light should be able to penetrate it in that case, but I think it’s necessary for there to be at least some amount of light in the game. It would be pretty frustrating to get a completely black screen if you’re outside the facility in a diving suit and your light source breaks or runs out of power. And it wouldn’t make sense for any of the creatures in the ocean to have eyes, if their habitat had absolutely no light.So, there should be a little light there, just enough to barely see something moving near you if you don’t have an extra light source. I think it could be explained by saying that there are some kind of bioluminescent bacteria or something living on the ice.

Just a brief post to clear some confusion about the future of SCP-CB:

Apparently there was an announcement/post on the SCP-CB community page on the Russian social network site VK declaring that the development of the game has ended and there will be no more updates.  This isn’t the case: there will still be (mostly minor) updates every now and then, even though I’ve started putting more focus on other projects.

I’ve been turning this game concept idea over in my head for maybe year and a half, and now that SCP-CB v1.0 is out, I’ve started putting more focus on it. Some how the fans of SCP-CB might be disappointed to hear that it won’t be a horror game (although I’m confident it’ll still provide some tense moments to get your heart pounding), and even more disappointed over the fact that it will be a 2D game. I hope you will be able to enjoy it nevertheless, even if though it will be something very different from SCP-CB.

Anyway, the working title for the game is Subsurface. It takes place a few hundred years in the future, where a bunch of human colonies have been established deep inside the icy crust of Jupiter’s moon Europa (due to the deadly amounts of radiation on the surface). The vast subsurface ocean under the crust is used as a transport route between the colonies and a source of natural resources. There are also a number of underwater research facilities / defence outposts established near some “transportation shafts” leading from the colonies down into the ocean, and the game will be taking place in one of these.

In a nutshell, the player’s job is to keep the facility operational, while carrying out various tasks to earn funds for buying supplies and hiring new crew members. The enormous pressure outside the facility is not the only threat, since (not so surprisingly) the ocean is full of different kinds of life forms, from harmless little creatures to colossal Lovecraftian monstrosities. Replacement parts and other supplies are also extremely hard to come by in Europa, so the facility is filled to the brim with makeshift equipment and future equivalents of duct tape repairs, and things are guaranteed to break every now and then (powering down the lights in some part of the facility if the player is lucky, or blowing up a 10-foot gap in the pressure hull of the reactor room if not).

The gameplay is split into days or “shifts” which last about 10 to 20 minutes, during which a random event (or several) will take place. It can be a distress signal coming from nearby the facility, a gigantic sea monster appearing, a crustacean swimming into and breaking the cooling pumps of the nuclear reactor powering the facility, something breaking through a window in the medical bay and disappearing into the ventilation system or a swarm of strange, leech-like creatures attaching themselves to a window in the control room, somehow starting to gnaw their way through the glass. In addition to the scripted events, there’s a number of other things that could go wrong: if the player tries to weld a leak using a weapons expert who doesn’t have the skills to operate a high-pressure welding kit (because all the qualified personnel died during the last round for example), it might cause further deaths and damage to the facility, or if the player is putting too much stress on the nuclear reactor, it might lead to a meltdown.

When the shift ends (after the set time period or when the player has taken care of the random event or other problems that arose), the player will receive an amount of money depending on his success during the shift, which can be used to buy new equipment, supplies and hire new crew members for the next round. If the player is unfortunate enough to lose the entire crew, it’s game over.

TL;DR: sort of like Space Station 13 with a hint of Dwarf Fortress, in the setting of Pressure.

No Blitz3D anymore! Now I’m using C# and Monogame. The physics of the game are handled by Farseer, and the possible multiplayer features by Lidgren. The game won’t be a Windows exclusive like SCP-CB, since Monogame also supports Mac and Linux.

This is still a bit of a question mark, but it’s possible that there will be an online multiplayer mode. I haven’t got much experience in network programming, so I’ll definitely need help further down the line to make it happen, but I’ve actually already written a functional server/client-system for the game using Lidgren, which is capable of syncing the characters between clients. I’ll focus on making the single player mode playable before delving deeper into the multiplayer mode, but I’m also trying to design the code in a way that would make multiplayer integration as easy as possible in the future.

Even though I’m not planning on releasing the entire source code like I did with SCP-CB, I will be putting a lot of effort into making this as moddable as possible. All the graphics and sounds will be unpacked, so they can easily be edited by anyone. I’m also trying to avoid hard-coding any content as much as possible: a large part of the game logic and content will be in easily editable Lua scripts and XML files.

Will it be free?

This won’t be a freeware game, but I will keep releasing alpha- and beta-versions along the road for free just like I did with my previous games. I can’t give any accurate estimates to the possible price tag of the finished game, but if everything goes as planned and I don’t have to cut down on the admittedly ambitious feature list, I think something around 5 dollars might be a reasonable price.

As to what state the game is in now: So far I’ve mostly just been thinking through the design details of the game and how I’ll go about implementing them; Couple of years of struggling with the code of SCP-CB, a house of cards built on ad-hoc-spaghetti, has shown me the importance of planning beforehand, which is why this time I’ve put some serious effort into thinking through the details and scope of the project before starting to actually make it.

The design and planning part is starting to be in a pretty good shape now though and I’ve gradually started putting those plans into action. Here are some of the things that I’ve implemented so far:

And here’s what it looks like now with some placeholder graphics (the second picture is a quick mockup of how it might look like with some lighting effects): 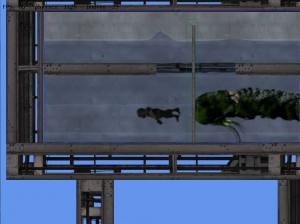 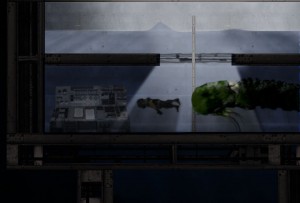 If you’ve kept a close eye on the Dev Topic in the SCP – Containment Breach forum, you may have seen brief mentions of my plans on starting my own company. It’s now official, and now with the launch of this website and blog I’ll be keeping you more up-to-date on my further plans and projects.

So, what does this mean for the future of SCP-CB and the following projects? To be honest, it doesn’t change much from the player’s perspective – I’ll be developing and releasing games just as before (until Undertow Games grows to become a wildly successful full-fledged game studio, that is ;)). But from my point of view, operating as a legal business will make it slightly easier for me to eventually publish a commercial a game and it also grants me some tax benefits. And since I went with the simplest form of business in the Finnish legislation, “yksityinen elinkeinonharjoittaja”, which is to my knowledge pretty much equivalent to sole proprietorship,the amount of licenses, paperwork and other bureaucracy required is fairly minimal.

Actually the main reason that led me into starting up Undertow Games now instead of say, a year from now when the next game project is closer to being released, was a software development course that I’m currently doing as a part of my Computer Sciences Degree in Turku University of Applied Sciences. We’ll be doing a software development project in a small group for a company of our choosing, and after I dropped in the idea of me starting up a business for which we could create whatever we choose to, it didn’t take long before our 5-member team had started a cool little game project. As a clarification, this game isn’t the same as the aforementioned larger commercial game I’m hoping to release in maybe a year or two, just a smallish student project that will be released for free around next February.

I’ll tell more about both of these in-progress game projects and what’s going on with SCP – Containment Breach in later blog posts. If you want to keep yourself updated, you can subscribe to email notifications about new blog posts using the widget in the sidebar!