#1 by Weeng
So I've built a German WW2 Type VII submarine off it's actual blueprints. Liberties were taken here and there to make it playable and !!fun!!, this is far from a replica. Highly inspired by Unterseeboot 1914. Has a few experimental design decisions, all of which are working adequately. Built for multiplayer specifically. A voice-coordinated crew of 5+ highly recommended. Bring feedback. <3
^ that description is couple years old 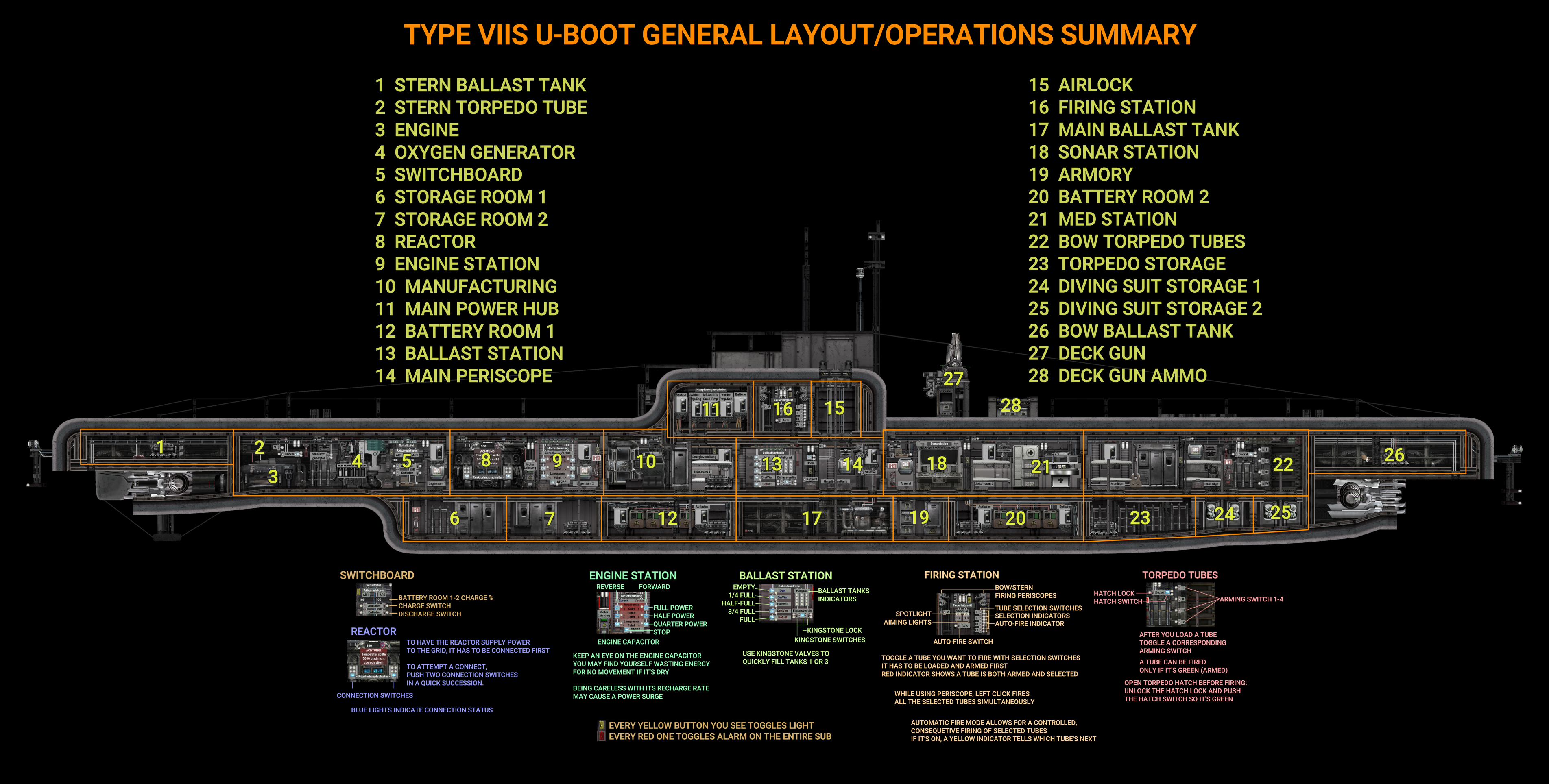 ).
Definitely helps to understand the german signs here.
Love how cramped this feels.
The torpedo dispensers for more rods is another nice touch.

Only being able to shoot straight (I guess) in addition is a bit harsh, though but only consistent and following through with the akin to real-life vessel feel (but those do have seeking torps).

The only nitpick I could come up with so far if forced to is that it unfortunately does not have that full brig/ballast encirclement and hence added ruggedness and forced-outside repairs which Unterseebot 1914 introduced.

A real beauty you are sharing here. Thank you!

#3 by Weeng
Finally got to MP test it, 'ts daym fun
If its pub server though, its always the same - no one can figure out anything, nor even tries to
PVP has shown a huge flaw - torpedo tubes angle of zero mirrors improperly, which means the mirrored ship has them cough pointing inside cough
Anyway, made a huge TODO list, updating.

#4 by LandonGam3r
New kind of submarine where the crew actually has to work together and communicate as on an actual submarine. Totally complete with the detailed design, very nice! Happy to hear you used the Unterseeboot 1914 as inspiration

I am afraid however I cannot put it in roulation on BT Public #1, the population is too wide ranged to have the crew work together and understand what needs to happen. Still I think this is a very nice addition to RP and private servers!
http://barotrauma-server.com/ - Barotrauma Server 24/7 - BT Public 24/7 - Join and play!

#5 by Weeng
Updated the design. Major changes\fixes:
-Torpedo hatches' lights now do not desync
-In PVP, a mirrored sub has its torpedo tubes facing the enemy, not inwards
-Added a depthcharge station in place of small useless aft compartments (that were also undrainable)
-Deck cannon' loader is properly accessible now
-Actually more or less thoughtful equipment placement
-The reactor is nerfed to oblivion encouraging some power management & batteries are actually involved now, reactor also has a warning label w/ its overheating temp
-Following this, lights and oxygen systems are toggleable
-Torpedo warheads are replaced from useless ic4 to c4
Many more small changes.
A re-wiring update that fixes misplaced wiring may or may not come in the future cause im too lazy to do it at the moment.
Updated the DL link.


LandonGam3r wrote:New kind of submarine where the crew actually has to work together

Yep, thats pretty much the reason it exists

When I saw those ballast controls it has, specifically : D

LandonGam3r wrote:I am afraid however I cannot put it in roulation on BT Public #1

No big deal, I've seen how pub handles it
Spoiler
it doesnt

Well, I figured my first sub should be small, hence Type VII. And since its german it should have authentic labels. I dont know a single german word myself, its half actual sub photos half google translate. : D

Nemo wrote:Love how cramped this feels.

Yep, that is another thing entirely. What I never liked in Baro' subs, they all have those huge hallways and such. Practicality is overlooked a little bit too much, in my opinion.

Nemo wrote:Only being able to shoot straight (I guess) in addition is a bit harsh

Nemo wrote:The only nitpick I could come up with so far if forced to is that it unfortunately does not have that full brig/ballast encirclement and hence added ruggedness and forced-outside repairs which Unterseebot 1914 introduced.

Ive considered this but it would increase the hull size substantionally, ruining its similarity to the original.

Celtic12 wrote:I would suggest english placards as the german ones add an unnecessary layer of complexity

Im sorry Dave, Im afraid I cant do that.
A radical update is brewing though, which will include an operating manual among other things.

#9 by Weeng
Update. A biggie.
-Whole sub rebuilt from scratch, it is now 1:1 scaled and visually 90% close to original
-Thanx to this, the doors are easier to get through
-Ballast control station now more intuitive
-An alarm system that is (probably) actually working without desync
-Oxygen indicators in every major compartment
-Color-coded (yellowish-greenish) light switches in most of the compartments
-Powergrid reworked, now there's a chance you're getting cooked for ignoring power fluctuations
-Following this, a battery control station
-Depth charges gone, welcome back realism
-Something else i forgot

So it's technically a new sub. And now I guess it finally IS complete, though you do bring in here any weird stuff you may encounter.
Regarding that manual, well im too lazy atm. Probably later.
Updated the OP-post DL link.

#10 by HOUNDOFGROZNY
An actual guide would be great. I find this submarine to be the best looking one, and it's very functional too, but even though I have my Das-Boot glossary book handy near me, it'd still be very useful to know the translations, functions and know where is what. Any update on the guide, or is there anyone who's willing to teach people? A dedicated server for this sub would be amazing, too.
19 posts
Post Reply