Subsurface is progressing nicely and I’ll be releasing a new version in a week or two. However, it probably won’t be called Subsurface anymore. Back in the first posts about the game I mentioned that Subsurface was working title, but it kind of stuck and I started liking it. Now I’ve noticed that the name is a bit problematic: apparently there’s an indie game studio called Subsurface Games and a dive log program called Subsurface, which makes the game somewhat hard to find by googling.

So, I guess a new name would be in order. So far I’ve come up with one potential name, which I think sounds very appropriate for the game:

Barotrauma is physical damage to body tissues caused by a difference in pressure between a gas space inside, or in contact with the body, and the surrounding fluid.

Barotrauma typically occurs when the organism is exposed to a significant change in ambient pressure, such as when a scuba diver, a free-diver or an airplane passenger ascends or descends, or during uncontrolled decompression of a pressure vessel

If any of you want to share your thoughts about the name or have any other name suggestions, I’d love to hear them!

Also, here are some of the things that will be in the next update:

– Major optimization and a ton of bugfixes/improvements in the networking code. And by major I mean MAJOR: most of the time I’ve spent on the game after the last update has gone in testing everything I can think of and making the multiplayer mode smooth and stable. The game now also generates a detailed report whenever it crashes, which will make it much easier to fix the bugs that I’ve missed.

– Several things to prevent people from sinking the sub within minutes of the round starting. There are security officers armed with stun batons now, who may attempt to immobilize and capture saboteurs. Blowing up the reactor is also much harder: it takes almost a minute for it to overheat, and when temperature starts to get critical, a warning light switches on in the command room and a button can be pressed to shut the reactor down remotely.

– A basic tutorial which walks players through the most common tasks on board the sub. In the future there will also be additional tutorials that take a more in-depth look at the various game mechanics (and why not one that explains how to use the submarine editor).

– Server admins can now play themselves without starting another instance of the game.

– A bunch of new items, graphics, sounds and a second submarine in addition to Aegir Mark I.

– An auto-updater, so you won’t need to re-download the entire game whenever there’s an update.

– Linux port of the game is almost finished and will most likely be released alongside the next update. After that, I’ll start looking in to the Mac port. 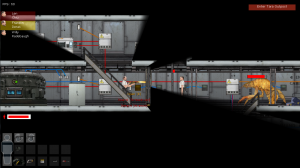 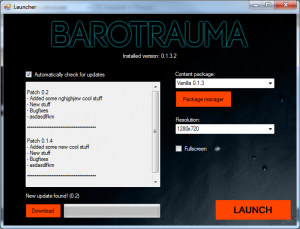